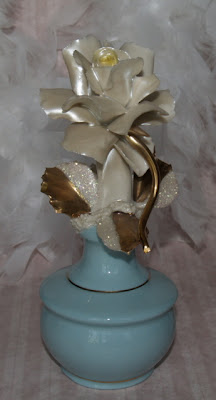 There is something special about Capodimonte porcelain. The delicate beauty of these pieces and the obvious quality of artwork makes them timeless. Just to see the petals up close, created by artisans who put so much love and dedication into their work is a feast for the eye. My Grandmother always had a few pieces on display in her home so I think the women in my family tend to collect it for nostalgic reasons as well as for its beauty.

The white rose figurine above may be found in our store under "Viva l'Italia." This is a category I just created specifically for items made in Italy.

Below you will find some fun facts about this pretty porcelain as well as collecting it today. (Credit is given below for the paraphrased info.)

Capodimonte porcelain actually dates back centuries. The first pieces fired were produced in Naples, Italy from 1759 to 1780 at the Royal Factory, according to the Capodimonte Limited website.

“The Capodimonte name was synonymous with the finest quality Neapolitan porcelain and ceramics from that period onward,” the site explains. The Royal Factory, which no longer exists, came to being when King Charles of Naples married Maria Amalia. She was the granddaughter of Augustus II, who in addition to being the King of Poland, also founded the first European hard paste porcelain factory in Meissen, Germany. King Charles developed a curiosity about porcelain through his new wife’s family. This interest turned into a passion that led to many years of research and development before the Royal Factory came about.

Once the formula for porcelain paste was perfected, many skilled craftsmen and artisans, both men and women, worked to produce fine Capodimonte pieces. Plates, vases, small and large bowls, tea and coffee cups, large and small jugs, sugar bowls, tea caddies, teapots, snuff-boxes, and walking stick handles mounted in gold are among the fine pieces produced at the factory in Italy.

The factory eventually moved to Spain and back to Italy again several decades later under the direction of King Charles’ son, Ferdinand. During this period, the shape, style and decoration of the porcelain production was similar to that of the original Capodimonte factory.

Today, most collectors of Capodimonte porcelain find mid-century electric lamps, figurines , molded flowers, and other decorative objects made during the last century. Most of these are marked with some variation of the blue N under a crown mark; many of them are also marked with factory marks.

(This post was taken from information found on About.com-antiques)

Posted by Jillian's Bella Rosa Antiques at 10:55 AM

A beautiful vase and great info!
Hope you had a lovely Mother's day!