Tea for Two ~ The History of TEA 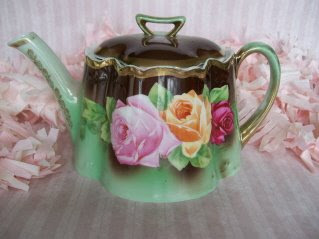 Ever wonder who started the habit of drinking tea? I suppose tea drinkers would not consider this a habit, but an EVENT. A way to start the morning, or to relax in the early afternoon. Either way, it has been around for a very long time and made its way around the world from China. The first teapot reportedly came from the Ming Dynasty. The beautiful rose teapot and matching teacup shown above and below are not from the Ming Dynasty, but made and handpainted in Bavaria. They can be found in our online store, Bella Rosa Antiques. This lovely tea set came to us by way of a Pennsylvania small town country auction. 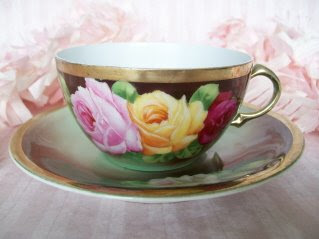 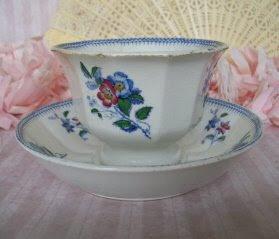 Often kept in locked cabinets or small wooden boxes called tea caddies, fresh tea was brewed in the morning. It was then not unusual for the tea leaves to be strained and reused for tea in the afternoon. Tea sets often included a tea bottle, a small lidded flask-like vessel, which held a modest supply of dry tea leaves. Because of the expense of tea, it was considered just as rude for the guest to refuse more as for the hostess not to refill one's empty cup. Generosity and acceptance were the fashion so, in America, guests learned they must turn their teacups upside down when they had enough.
The handless cup and saucer above and found in our shop, is consistent with many of the patterns and transfer wares found in Pennsylvania. As mentioned earlier, hot tea was poured into saucers to cool...but first it was poured into a handless cup. Tea was drunk from the saucer while the cup was placed on a cup plate to protect the table.
However you like to enjoy your tea, the history of it is fascinating. Also fascinating are all the different designs and patterns found on tea sets along with their dainty partners.....cups and saucers.
Feel free to tell us about your love of tea, your favorite tea set, or any other tea tidbit! Go ahead...we'll put the water on for a boil.
Posted by Jillian's Bella Rosa Antiques at 9:51 AM