Bon Jour! Bon Jour! Welcome to my "Sundaes in Paris" birthday party that I had for my sweet Bebe girl! (She turned 9, can you believe it?)

We had a ball. Really a lot of fun to put this party together and even more fun to watch it unfold. 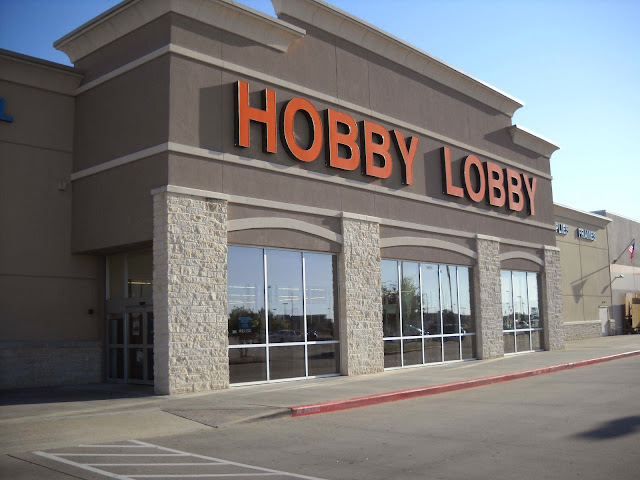 Bebe and I started out brainstorming for her party one day during the summer in Hobby Lobby. I tell you, with all of the neat things they have in there, it was easy to get creative... and that is when the "Sundaes in Paris" birthday theme was born.


I decided to use my old Print Shop computer program to design invitations and signs to display around the party. My former source for graphic design was Pic Monkey. They are now requiring you to join and start a trial of their membership plan. Since I do not want to pay a membership fee, I decided to skip it all together. (Does anyone know of another FREE graphic making site?) 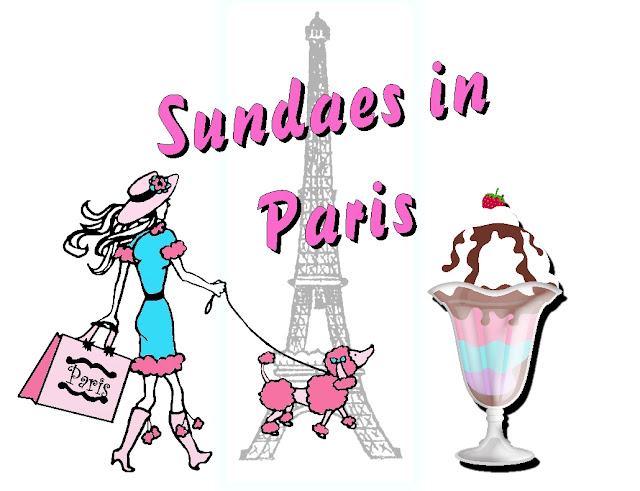 Anyhoo, I came up with this after purchasing a couple of very inexpensive digital downloads on Etsy and using clip art in Word. Inexpensive as in about $3. Works for me! 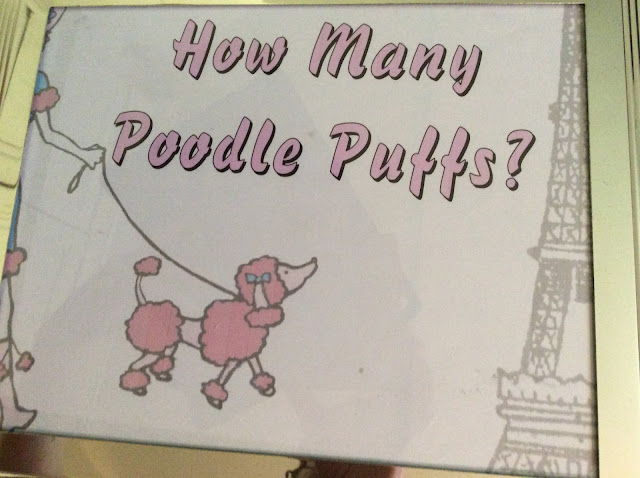 I also made other signs using the same graphics, for different areas of the event. A Boulangerie, a French store, etc. 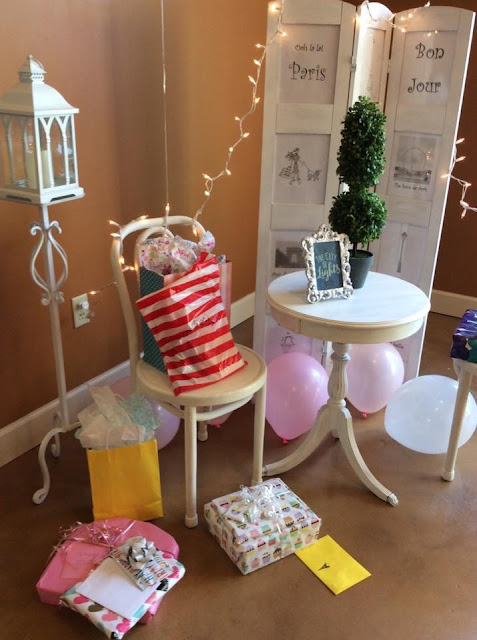 The hubs and I worked on fixing up and chalk painting some parlor chairs, a small pedestal table, and a tea cart.
Lots of work but we can sell them in the shop afterwards.

It all looked so cute! 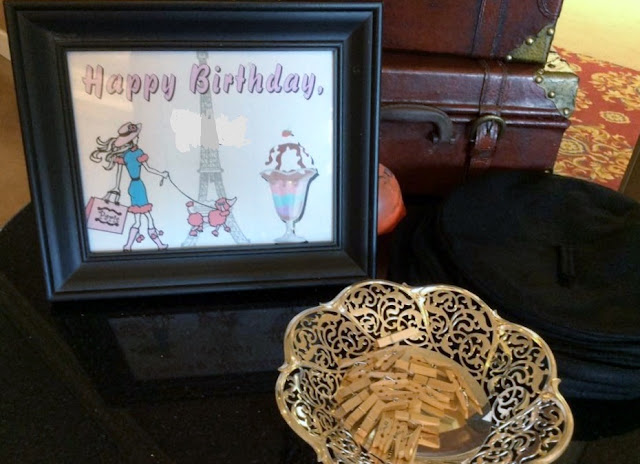 As each girl arrived she received a French beret, a loot bag filled with 4 "Poodle Bucks", and 2 tiny clothespins. 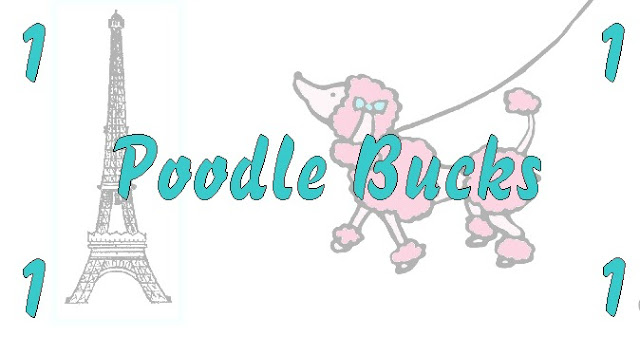 The poodle bucks were given out as prizes for the games won, then saved to spend in a "French Store" at the end. So that no one girl would go home with nothing, she at least started out with four.

The clothespins were for the "Can't say the word" game. I'm sure some of you have played this game at baby showers. We thought it would be a fun way to earn poodle bucks and we chose the word POODLE as the forbidden word. If you said the word poodle during the course of the party, another partier could take your clothespin. The one with the most, wins. 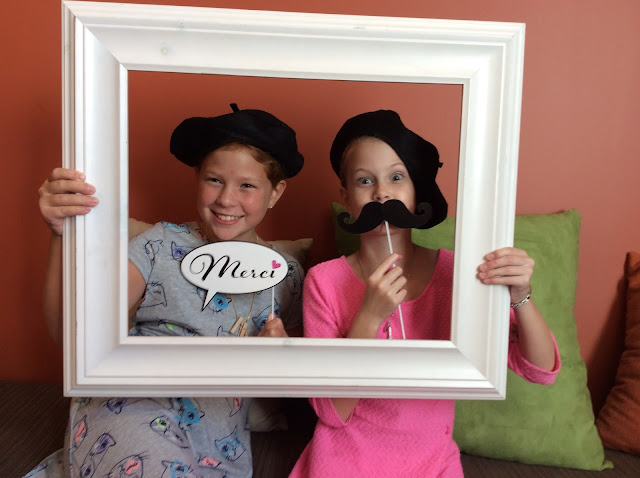 The key to a fun party is to plan enough so you can keep them busy. The photo booth props and picture frames help to break the ice and get them laughing. 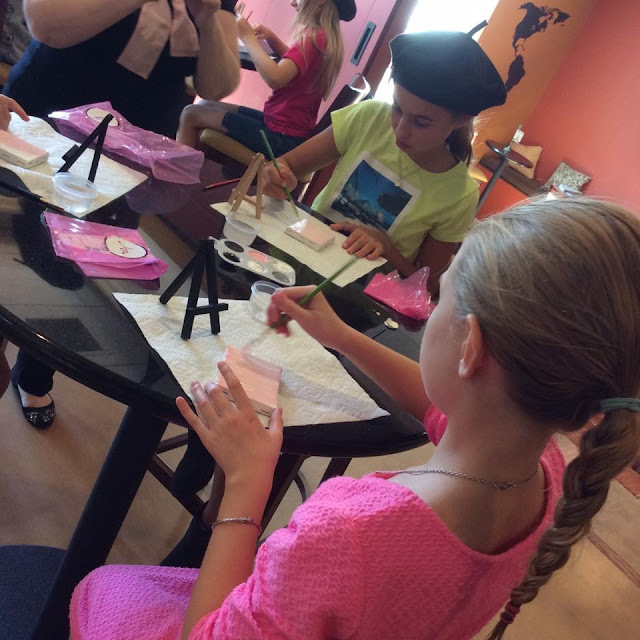 Then we went right into painting mini versions of the Eiffel Tower. This project needed to be done first so the mini canvases had time to dry before the end of the party. 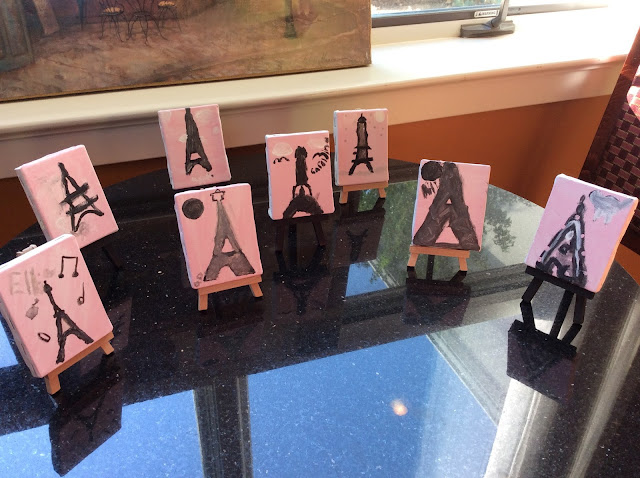 The girls painted their own versions of the Eiffel Tower.
I intended this to be similar to the adult "Paint Nights" that have become popular to do while drinking wine in a group setting. Minus the wine!  I had asked my niece to lead the younger girls in how to paint the French landmark we all love. Unfortunately my niece was terribly sick yesterday and couldn't make it. So, I just let the girls paint on their own and I think they are adorable. 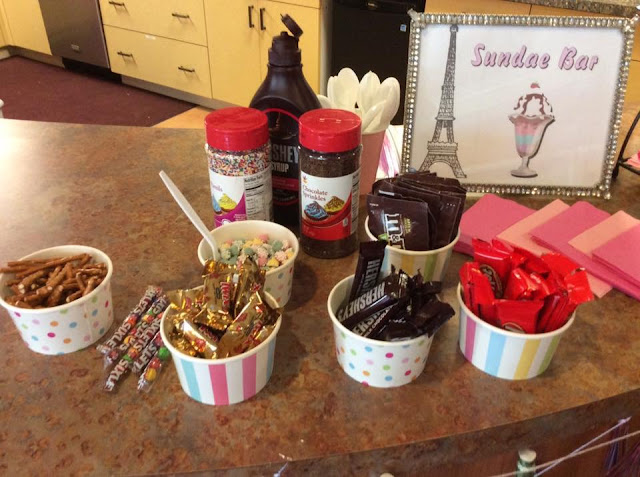 Next we all had delicious ice cream sundaes that were put together at our "Sundae Bar." Mmmm. I did get a chance to make a small one for myself. My Sister and two other Moms were on hand helping me so they took a break too and had one. Our reward! 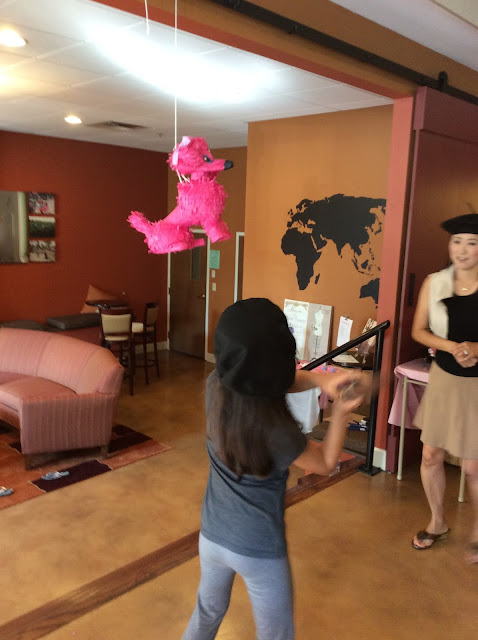 After stuffing ourselves with sweets we let the girls take a whack at the hot pink poodle piñata. I really thought this thing was going to bust open right away, it seemed so fragile. It took a licking but kept on swinging! Finally it succumbed to the girls' frustrated swings. Candy and mini eraser rings were scooped up quickly! 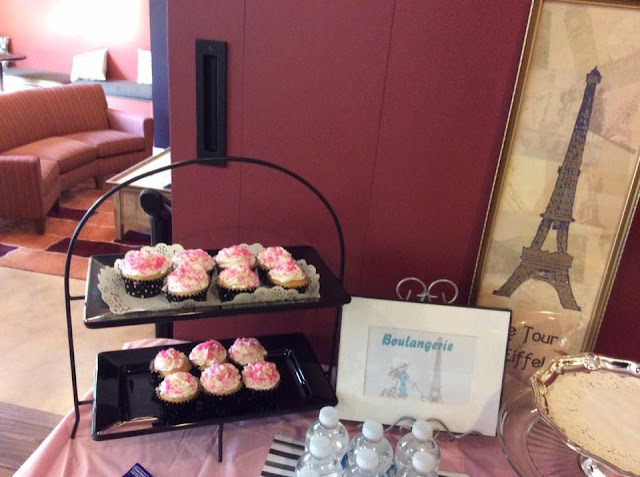 Toward the end of the party we did cupcakes, candles, the birthday song, and then opened presents. 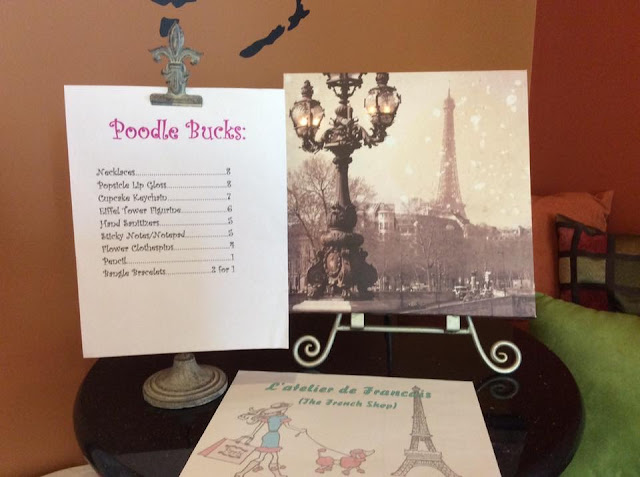 At the very end, the girls were able to cash in their "Poodle Bucks" ... 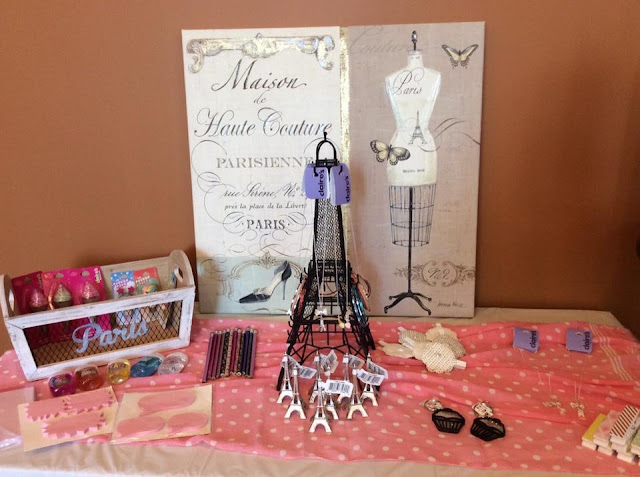 and go shopping in the "French Store." 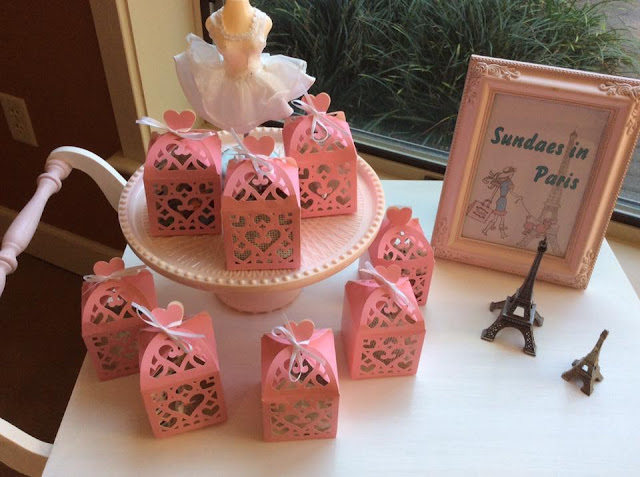 Thank you "Merci" favor boxes were handed
out as each girl left.
Like I wrote earlier, we all had a blast! 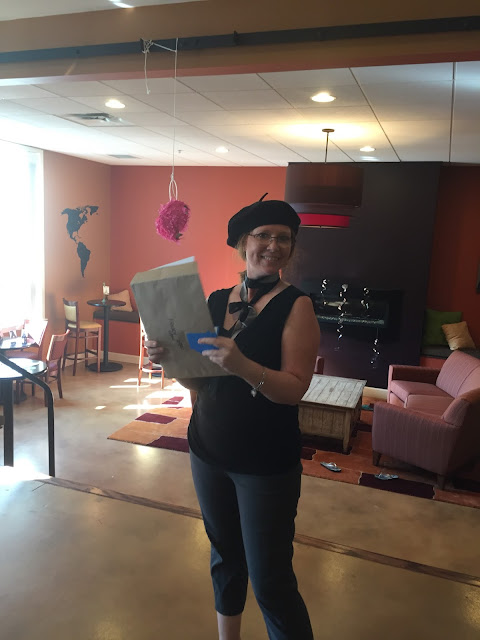 Now I need time to rest and recoup...
I'll be back with some of our other
projects in the shop, soon!

Vintage & Co.: A Mid-Century Before & After

Well hello blog world! I am back well, not back but posting less frequently. Between all of life's craziness, I still enjoy blogging! We are in full swing here between our brick & mortar shop Vintage & Co., my Dad living with us, a birthday party to plan this weekend, and my online shops! But, it is all good. We are certainly not bored. 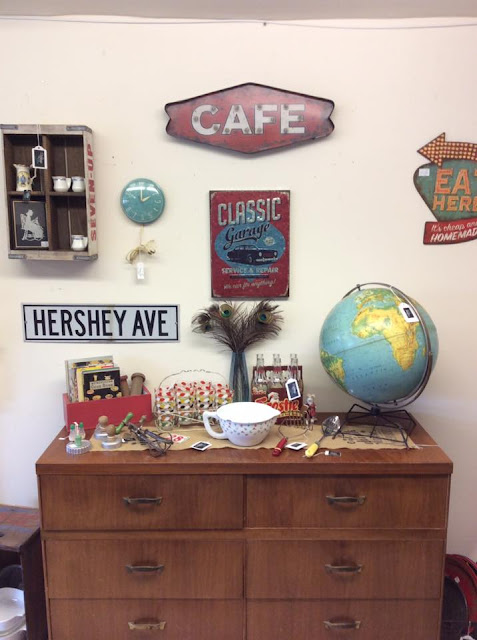 And I was not bored when I decided to makeover this mid-century dresser. Let's just admit it. Total drab! 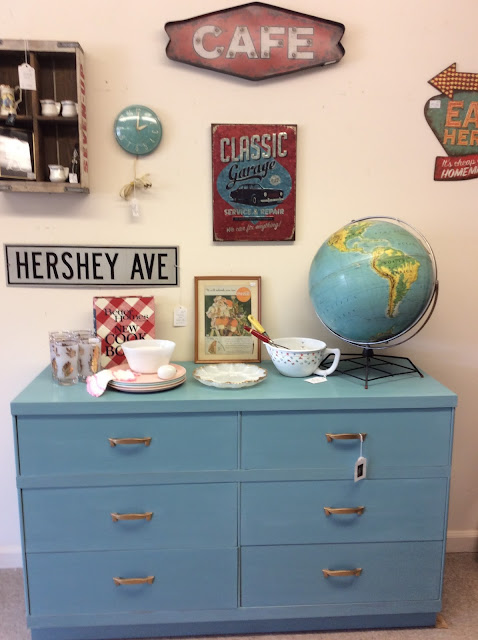 I decided to go with an aqua chalk paint color. LOVE!

Instead of displaying it as a bedroom piece, I have it in our "vintage kitchen" area because well, aqua and retro vintage just seem to go together! 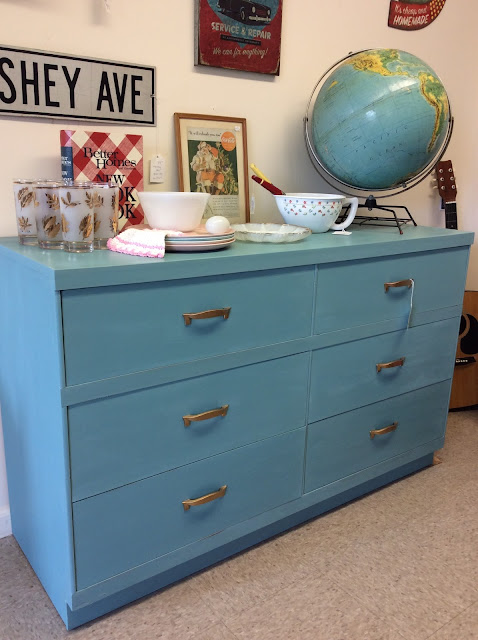 I gave the handles a gold leaf treatment. They really pop nicely now against the dresser. 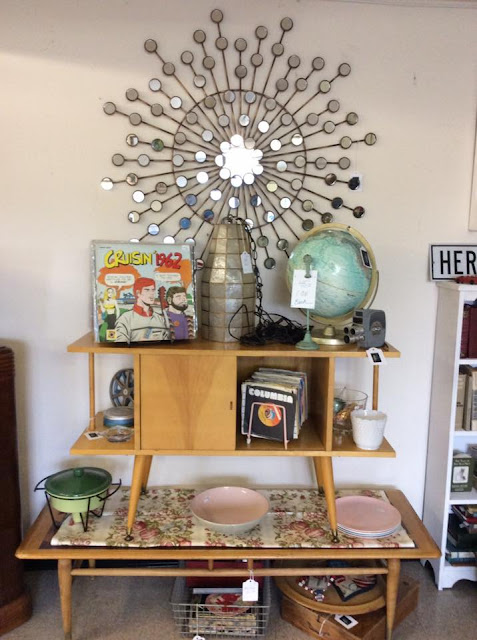 Another fun mid-century piece we found is this hand crafted "entertainment" center. It looks really cool in the shop, too with our other retro style stuff!

Other projects on the horizon... a vanity that needs a total revamp, table runners, painted mirrors, and a night stand.

Thanks so much for checking out my mid-century makeover... I'm off to stuff favor boxes and I can't wait to show you all of the things I worked on for Bebe's birthday party! The theme is "Sundaes in Paris." Ooh la la!

Posted by Jillian's Bella Rosa Antiques at 10:08 AM 6 comments: