Last week I listed some of my best finds so far.

One being this beautiful mesh bag from the 1920's.
What I didn't notice: It was marked none other than
Whiting and Davis!

Excited about my new discovery, I'd like to share some
info I dug up on these little beauties... 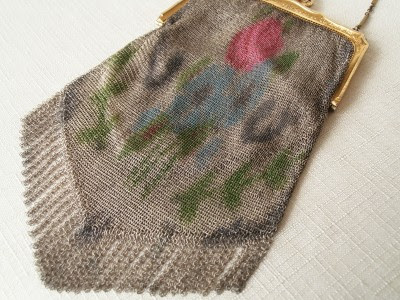 The history on how the company started, taken from this page:

Whiting & Davis began in 1876 as Wade, Davis & Company in Plainville, Mass. Even though the company is recognized primarily for making quality metal mesh handbags, they began by producing jewelry such as brooches, bar pins, chatelaine chains, hat pins, and cuff links, according to the Whiting & Davis Web site. 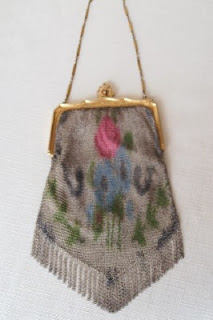 Charles Whiting, first hired as an errand boy by Wade, Davis & Company in 1876, worked his way into management, and eventually became a partner in the firm in 1886. The company name was changed at that time to Whiting & Davis. By 1907, Whiting was the sole owner of the company.

Charles Whiting made the first mesh bag for the new Whiting & Davis Company in 1892. The bags that followed over the next two decades were made completely by hand. In fact, many were made by local women in “sewing circle” fashion who worked linking about 1,000 rings a day - a slow and laborious process, and one that Whiting found to be unreliable.
Working with a young inventor named A.C. Pratt, Whiting developed an automated mesh machine in 1912. Mesh for handbags could then be produced at the rate of 400,000 links a day, and in varying sizes, which grew the company’s production capacity significantly, according to Antique Purses by Richard Holiner (Collector Books).
By 1920, the company expanded from 12 mesh production machines to 500. Company growth during this period was so rapid that a branch was opened in Canada, and offices also maintained in New York and Chicago. By 1926 when a new factory was built, “Whiting & Davis was considered the world’s largest manufacturing house of its kind,” the company’s Web site maintains.
From 1912 through 1925, most of the bags Whiting & Davis produced were fashioned of sterling silver or vermeil (essentially gold plating over sterling silver). These were small bags with silk linings and hand engraved frames. Many were set with genuine sapphires and other gemstones. In 1923, First Lady Grace Coolidge carried a specially made gold handbag to her husband’s inauguration.
But as the 1920s wore on, Whiting & Davis began to explore other lower priced options for handbag manufacture making them available to a wider clientele. 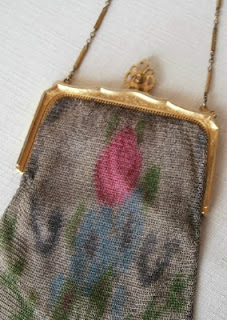 While some higher priced bags combining sterling silver with gold-filled metal were also produced in the latter 1920s, an effort was made to “broaden appeal and lessen the price,” Holiner shared. Bags were then made of base metals, silver or gold plated brass, copper, and nickel silver (a form of false silver), and the frames were machine stamped rather than hand engraved.
The flat mesh bags made during this period were painted with vivid patterns, while the fine mesh bags, also known as Dresden mesh, had softer hues and a more muted appearance. They were all decorated, according to Holiner, through silk screening accomplished over several days – one color dried for 24 hours before another color was applied. In 1929, Whiting & Davis produced a large collection of mesh bags designed in conjunction with French fashion designer Paul Poiret, including what is now referenced as the Poiret Pouch.
Many clever and beautiful styles came about during this period including the Dylesia hinged bag fitted with a powder compact. Many bags with Art Deco themed enameling were also produced, and these are highly favored by collectors.
By the mid- 1930s, however, the company stopped producing the type of metal mesh handbag they’re most famous for, but they were far from out of business.

There is more info about where the company headed but basically when I got to the end and saw that they really weren't making these kinds of bags anymore I was saddened.

All the more reason to collect the antique gems!

Hope you enjoyed my mini tour of the history behind Whiting and Davis bags.

I'll be back with more tales of vintage finds later in the week...and the latest on our lake house search!
Posted by Jillian's Bella Rosa Antiques at 9:05 AM