Being in the antique business, we come across a lot of flower frogs. You know the usual type commonly found at garage sales....clear glass in a disc shape ... or there are the small pointy green metal pieces that look more like a wild animal hair brush than a flower frog.

But recently I found this little beauty while hunting for Bella Rosa inventory: 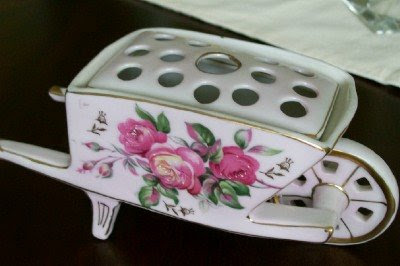 Not only was this one cute but it actually had a "theme!" A wheel barrow as in gardening. And it was adorned with lovely pink roses. PLUS...get this...another bonus: the flower frog "tray" comes out and you can use it for something else instead! Now this is my kind of flower frog!

It then led me to wonder where or when flower frogs started. I searched the internet and discovered an article written by Bonnie Bull. She writes:

Although flower frogs reached their heyday in the United States in the mid-twenties and thirties during the flapper era, they can be traced back to the 16th century in Europe where it was customary for pottery and china houses to mark their pieces. Glass flower frogs were not generally marked prior to 1870-- the year it became possible to record patents and trademarks on glassware. The oldest known record for a U.S. frog is a patent issued to S. Van Stone in 1875 for a conical shaped flower stand with concentric rings of holes stacked pyramid fashion. Another early creation is the mushroom-shaped, Mt. Washington condiment server/floral holder . A patent for this holder was issued to Andrew Snow, Jr. in 1893. Since the turn of the century some 20 well-known glass and pottery houses have manufactured frogs in the U.S.

They have ranged in shape and design from simple "rounds" to elaborate and artistic "figurals." One of the most prolific producers of glass flower frogs in the U.S. was Cambridge Glass Co., located in Cambridge, Ohio. Any round frog that says "PAT'D April 11, 1916" on the side is Cambridge. Some of the Cambridge round glass frogs have "Pat. Apl'd For" on them, and a few from the later years have "Cambridge" embossed on the side. All of the figural ladies are covered by a patent issued to A. J. Bennett on Oct. 18, 1927. Of the same era but cast in pottery are the R. G. Cowan dancing ladies with trailing scarf in hand. Many are individually patented and have double-walled bases. They are full of life and movement, reflecting an age of flamboyance soon overshadowed by the Depression.

The etymology of the term "frog" has proved more difficult to research than the actual items themselves. The term "frog" as it relates to a holder for flower stems does appear in 1968 in the Random House Dictionary of the English Language, but it is not listed in the Oxford and Chamber's etymological dictionaries. How it came into general use remains a mystery. Over the years flower frogs have been referred to by many different names; such as, flower blocks, flower bricks, flower holders, and floral arrangers.

Lots more information than I think I was looking for but thorough! Somehow though we still don't know how the term "frog" came about. Maybe one day the mystery will be solved. In the meantime, I hope some of the information helped you, too.

And if you'd like to purchase this flower frog you may click here to go to Bella Rosa Antiques.

awwwwww thanks for your sweet comment. I love love love decorating kid spaces. My dream is to one day have a boutique just full of different vintage items to decorate the home with .

Hi Jillian, my beautiful calling cards arrived yesterday. I had a very ordinary weekend and their arrival in the morning post made my day! They are exquisite. Thank you so much for the opportunity to purchase such lovely things.
Irene :)

Happy Pink Saturday on Sunday. What a very packed full of goodies post that was! I love keys... Hope your day is full of love and happiness.