Welcome to Let's Talk Vintage!
Today I am taking you all along on a journey into
the Land of Sweets via the Russian Nutcracker ballet,
which first made its debut, in December of 1892.
It was a celebration of my sweet Bebe's 7th birthday.
Her wish this year was to have a "Nutcracker Party."
Being the forever fan of the ballet myself,
I was just as excited to plan it.
Here is a little history from Wikipedia:
The Nutcracker is a two-act ballet, originally choreographed by Marius Petipa and Lev Ivanov with a score by Pyotr Ilyich Tchaikovsky (op. 71). The libretto is adapted from E.T.A. Hoffmann's story The Nutcracker and the Mouse King. It was given its première at the Mariinsky Theatre in St. Petersburg on Sunday, December 18, 1892.

Although the original production was not a success, the 20-minute suite that Tchaikovsky extracted from the ballet was. 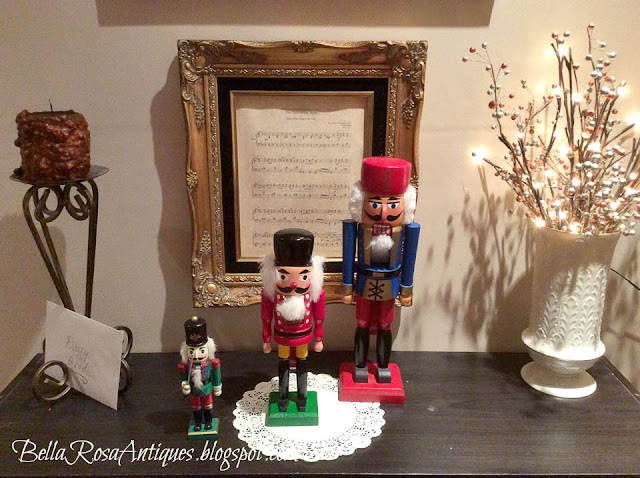 However, the complete Nutcracker has enjoyed enormous popularity since the late 1960s and is now performed by countless ballet companies, primarily during the Christmas season, especially in the U.S. Major American ballet companies generate around 40 percent of their annual ticket revenues from performances of The Nutcracker. 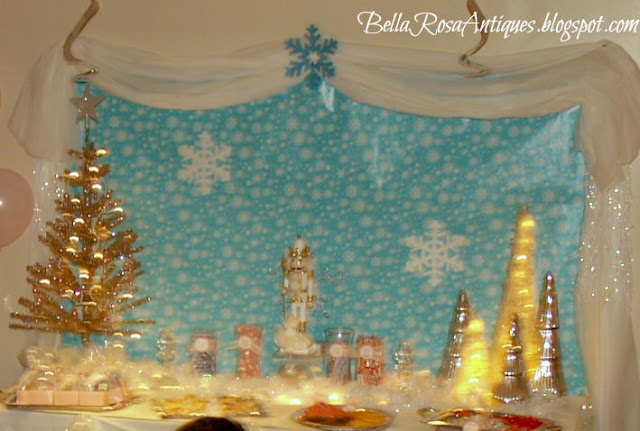 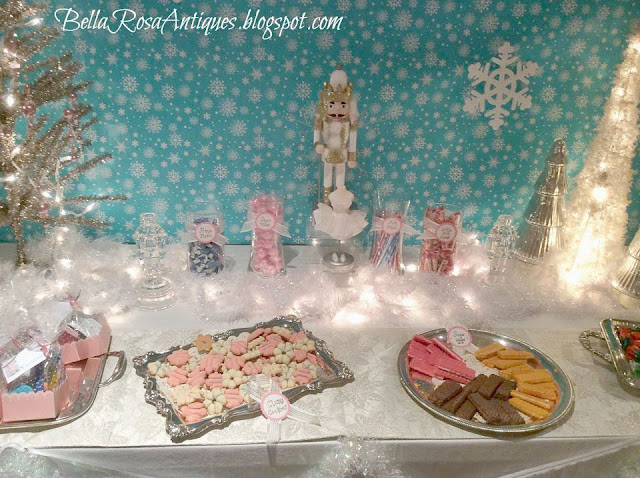 I created this backdrop and snowy scene...
for eye appeal as soon as you walked in.
Much of the décor I already had, and
some of the items were purchased
at thrift shops. 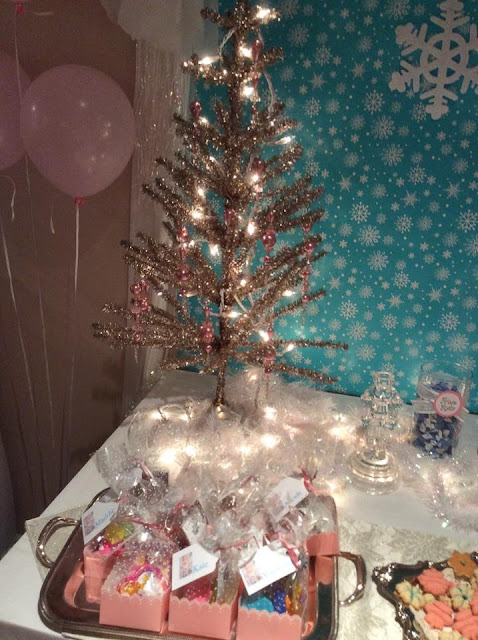 A sparkling tree graced the table, a purchase that I made several years ago from Katie's Rose Designs.  White lights covered by snowy garland gave a wintery effect.
I've been collecting silver plated trays for a while now and they came in handy for this table. One is holding "thank you" goodies that I gave to each girl as she left.
(Treat boxes by Martha Stewart.) 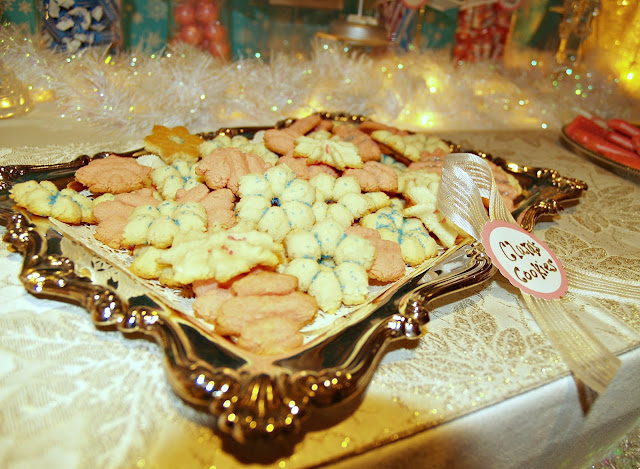 
press we found at a sale a couple of years ago.


I named them "Clara's Cookies"
with a pink label and white ribbon.
(Labels were from Party City.) 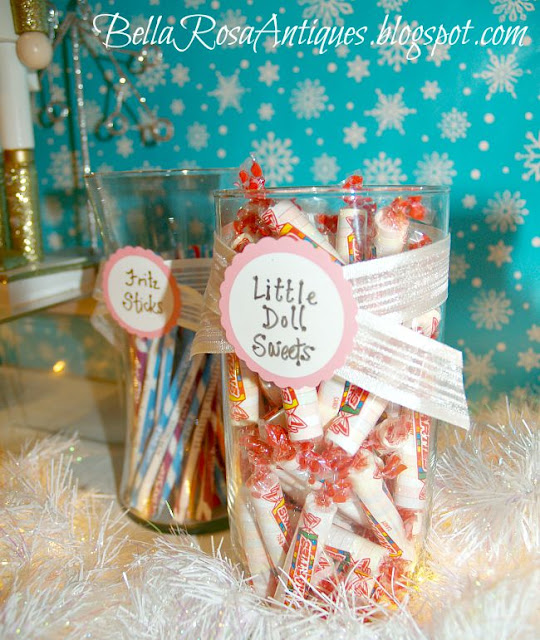 Other sweet treats were given
the same look with labels like:
"Little Doll Sweets" and "Fritz Sticks" 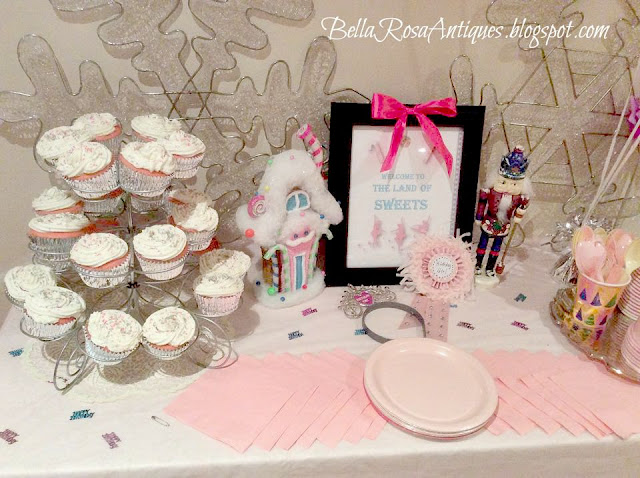 Homemade cupcakes with white icing
were bedazzled with silver
and pink sugar sprinkles. 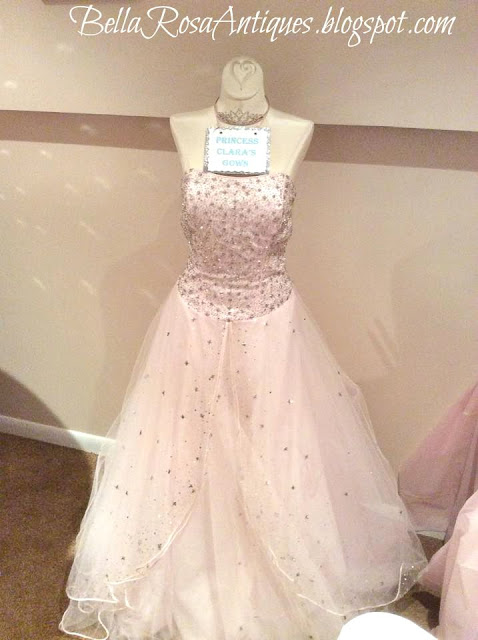 As the story goes, in her dream,
Clara turns into a princess.
Well, I found this beautiful pink
ball gown with sparkling silver
beads at our local Goodwill.
They had it in the Halloween
costume section.
I was in disbelief that it was there!
So of course I bought it!
It was the perfect touch.
I labeled it "Princess Clara's Gown." 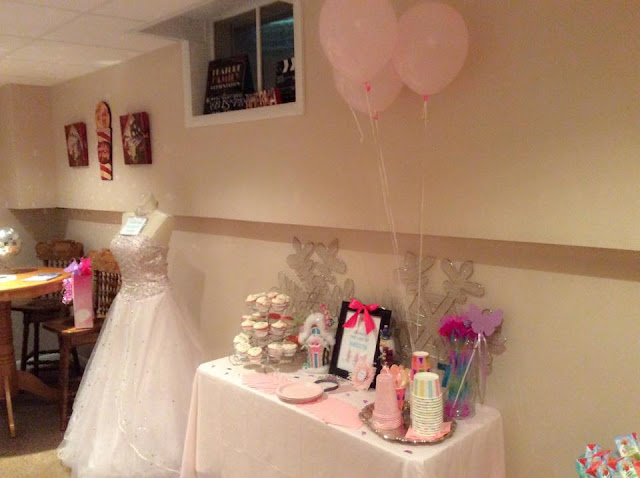 The big snowflakes in the background were found at the thrift shop up near our lake house. I've been collecting things to use for a few months now.
I had so much fun planning and setting up the party.
I even had a few surprises
for the little attendees. 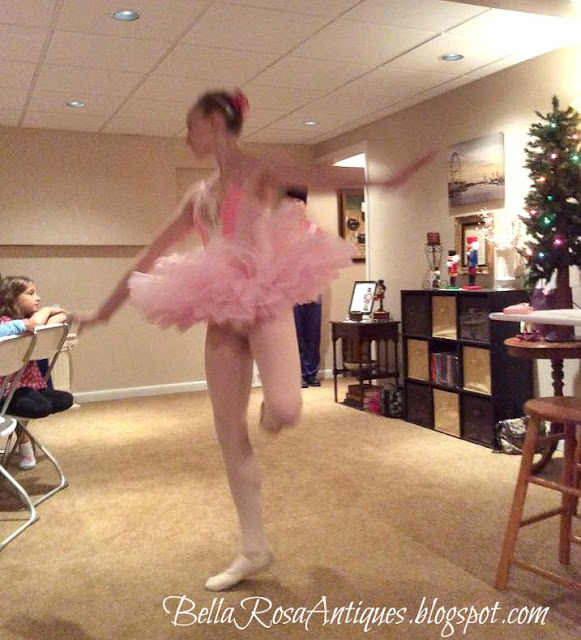 The Sugar Plum Fairy stopped by for a visit
and performed the dance from the show.
She is one of the senior dancers
from Bebe's dance studio. I was very
impressed and her talent was amazing!
I was almost in tears. You're laughing
right now but it was true!
(My Dear Hubby also wore a Nutcracker/soldier
costume to greet guests as they arrived.) 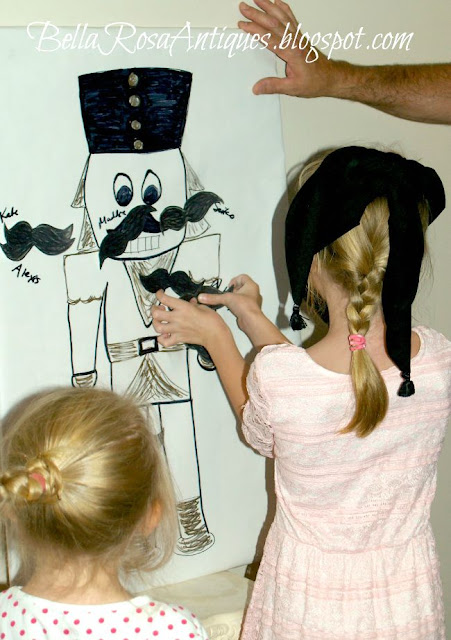 We played "Pin the moustache on the Nutcracker."
My drawing wasn't too bad! I printed the "moustaches"
on my computer using Word clip art. 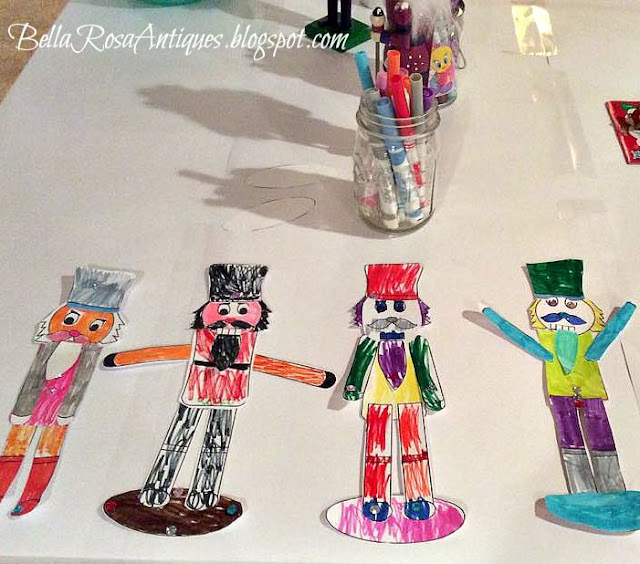 The girls also made their own
Nutcrackers and I just love how
cute they turned out. It was a
free printable I found online. 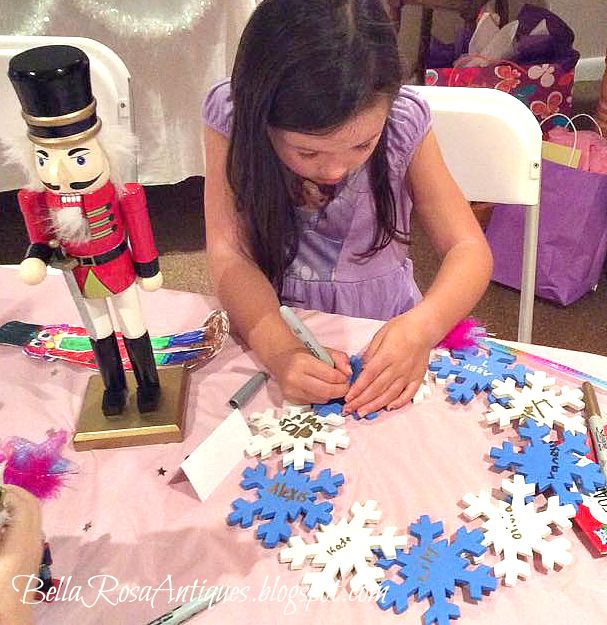 Before they left the girls signed
a snowflake wreath so Bebe
could remember who came
to her 7th birthday party
in the land of sweets!
Thanks so much for taking the time
to check out the great fun we had
celebrating 7 years with Bebe...
can't believe how fast the years go! 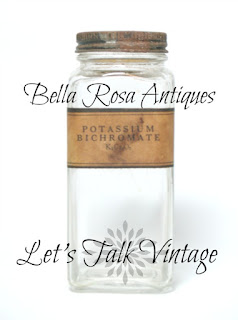 Here are this week's features: 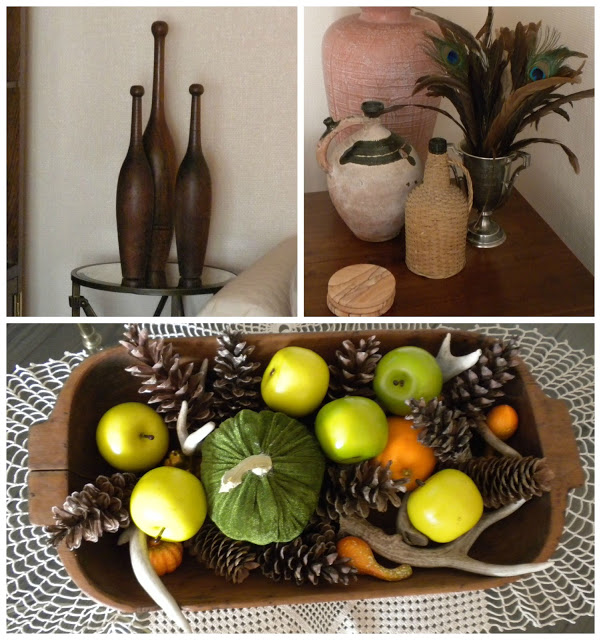 Rita of Panopoly shared her Fall Home Tour
with us. I just loved her use of the
antique exercise pins and all of the other
creative touches that inspired her. Great motivator
for me to get out my autumn décor! 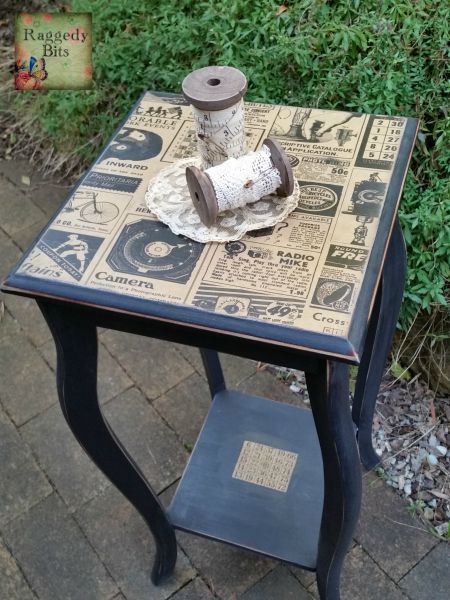 and Sam at Raggedy Bits shared this
amazing side table! Love how the
vintage paper theme totally
changed the look of it! 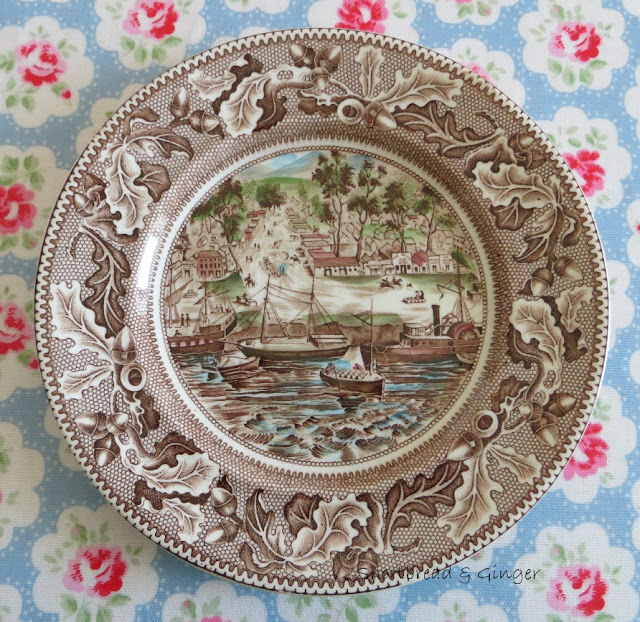 and Liz our latest LTV newcomer
(all the way from Scotland)
shared from her blog, Shortbread & Ginger ,
her awesome charity shop find...
and some "local history on a plate!" 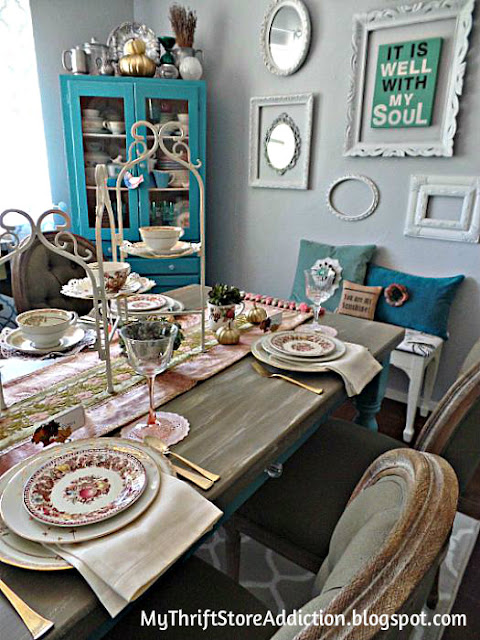 Cecilia of My Thrift Store Addiction
shared her rosy Fall tablescape.
Her combination of pastel, bright,
and warm hues created
an amazing palette!

Remember, if you were featured,
feel free to use the LTV button
on your side bar.
A big thank you to all who
participate. This party would be
pretty boring without you!
Now it's your turn:
Let's Talk Vintage! 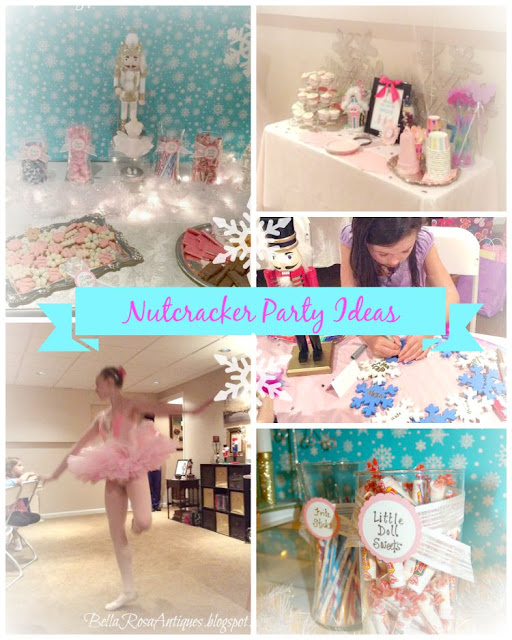 Jillian, oh my, two surprises for me today! Thank you for the feature of my fall decor, and your bebe's party! You & I both have a history and love of ballet, and this was just fantastic - your decor, the activities, and even your husband dressed as the Nutcracker. So, so sweet. My oldest daughter has danced several of lead roles in Nutcracker, including Clara & Sugar Plum Fairy, so this was a particularly sweet stroll down memory lane for me. Thank you for the party.
Rita

Thanks so much for hosting!!

Jillian thanks for hosting and I love those little nutcrackers.They are adorable.
Lots of blessings from South Africa
Sandra

Hi Jillian, your party looked fabulous! Thank you for sharing and for hosting. Jo

What an adorable idea for a birthday party---who said it must snow...in order to enjoy the Nutcracker---I'm sure you had the music in the background all the time. Love this ---since my going to be 3year old granddaughter wants 'Avengers' for her birthday, LOL.

Thank you for hosting--I just had to post this gorgeous artisan's work with her permission. We can't support the Arts enough these days, Sandi

Holy moly Jillian, you did such a fantastic job with your girlies party! She must have been in complete Nutcracker heaven. And how darling that your hubby dressed up:) Everything looked amazing, thank you for sharing with us!

What an amazing party! Your daughter is blessed to have such a creative Mom as you! Great ideas!

Jillian, your Nutcracker post brought back sweet memories. My oldest daughter was in our local performance every year for 10 years! Thank you so much for featuring my tablescape! Blessings, Cecilia

Jillian, I always love visiting your blog and enjoying your charming vintage finds. Thanks so much for hosting! Heidi, My Sweet Cottage

What an absolutely darling party, Jill--Bebe must have adored every special part of it. That thrift store gown is amazing!! Just the perfect touch for an already perfect party :) Thanks so much for hosting--

WOW What a GORGEOUS party! So perfect in every way and what a delightful time your sweet daughter must have had on her special day! Just beautiful!!! Thank you for sharing such a precious day!

A HUGE thank you for featuring my Paper Bag Side table! What an awesome thing to wake up to this morning! Thank you :-)

Another HUGE thank you for hosting such a wonder party once again and as always such a joy to read!:-)

Jillian, the party must have been a wonderful success! I love the way you decorated. What a wonderful memory for your dear Bebe. Thank you for hosting and sharing all the beautiful photos.

Oh my oh my oh my!!! This Nutcracker party is to die for, Jillian! Oh, how my daughter would have loved such a party at that age. (She's 13 now, but still a ballerina). I'll have to show her this party when she gets home from school today. Thank you for sharing this party today! :)
Catherine

What a fun party theme, you did such an awesome job with all the food and decorations. Thanks so much for sharing the party at VIParty.