This morning I had big plans to write a blog post about a dress form Dear Hubs and I transformed this weekend for sale in the antique booth.

As I went to get my camera I realized he drove off with it this morning on his way to work. Rats!

The history of the Toll House chocolate chip cookie... I borrowed this message from daily devotionals I have sent to my inbox from Homeword Devotionals. 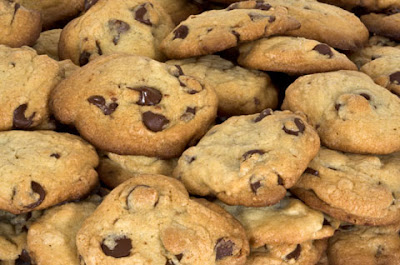 Ruth Graves Wakefield is credited with inventing a favorite comfort food for many, the chocolate chip cookie. The story goes that she and her husband purchased a toll house that had been built in 1709 for the purpose of housing weary travelers. In the 1930’s, they built on to the house and began serving travelers at the Toll House Inn, where Ruth’s incredible desserts were well-known. One day, while making Butter Drop Dough cookies she realized she was out of one critical ingredient, baker’s chocolate. Whether she made the next decision out of necessity or ingenuity we may never know, but she made the now-famous decision to chop up a bar of semisweet chocolate and drop it into the batter thinking the chocolate would melt into the rest of the cookie. Fortunately for us, the chocolate didn’t melt. Instead, it held its shape but with a wonderful creamy texture. Voila! The chocolate chip cookie was created.

The truth is, many of the world’s best inventions started out as a mistake. What turned these mistakes into successes? Much can be attributed to the attitude, perseverance, and creativity of the person behind it all. Dale Carnegie once said, “The successful man will profit from his mistakes and try again in a different way,” which is exactly what Ruth Graves Wakefield did. She later began a professional partnership with Andrew Nestle, the candy maker who agreed to place her recipe for Toll House Cookies on the back of Nestle semi-sweet chocolate. And, as they say, the rest is history.

While I don't have the rest of this written piece on hand it went something like this....sometimes a mistake is a way to learn something with some mistakes being more bitter than sweet....but the moral to this story is this: you don't have to be perfect to have a heart for God. It is a journey where the results are always good!

Taste and see that the LORD is good; blessed is the man who takes refuge in him.
Psalm 34:8

Something to think about the next time you have a chocolate chip cookie. I think I'm going to make some now!
Posted by Jillian's Bella Rosa Antiques at 9:27 PM

Jillian,
What a great post about something we all love! Even though you couldn't do the original post you had in mind this one turned out really well! I learned something I hadn't known! Thanks.

we talked about Choc. chip cookies in bible study this AM. The Lord IS good... and I need to remind myself that His ways are good too - even when I don't understand them.