Is this really a Hummel Figurine?

I found this write up through Kovel's newsletter. It is interesting to see how easy it is to mistake a piece like this. Read the question a reader had for them below. Their answer was very helpful and good to know! 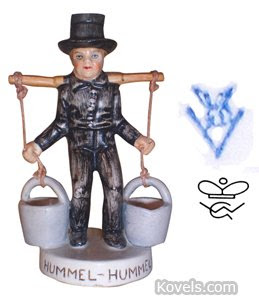 Q: My mother collected Hummel figurines for several years, but there is one figurine we can't find listed anywhere. It is of a man wearing a black suit and top hat and carrying 2 buckets of water. It is 5 inches high. The words "Hummel-Hummel" are etched and painted on the base. It is marked on the bottom with a bee inside a V and an impressed crown over 2 letters. Can you tell me if it is a genuine Hummel and what it is worth? If it isn't genuine, can you tell me the history of it?

A: Your figurine is The Hummel, the nickname of Johann Wilhelm Bentz (b.1787-d.1854), a famous water carrier in Hamburg, Germany. Before Hamburg had a municipal water system, water carriers worked in the city. Bentz was supposedly the last carrier. Children would tease Bentz and yell "Hummel, Hummel," the German word for bumblebee. He would curse at the children, hollering "Mors, Mors." The Hummel became a symbol for the city of Hamburg and a statue similar to your figurine was erected in 1938. Today there are several Hummel statues throughout the city. Hummel is also pictured on the sides of Hamburg's water trucks, and when the Hamburg soccer team scores a goal, the announcer says "Hummel, Hummel" and the fans shout "Mors, Mors." Your figurine was made by Goebel (now Goebel Porzellanmanufaktur, located in Rodental, Germany). The impressed crown mark on the bottom over the initials WG (for William Goebel) was used c.1923 to 1949 and the bee mark was first used c.1950, so your figurine was probably made c.1949-50. Don't be confused by the name "hummel" on your Goebel figurine. Hummel figurines of adorable children were designed by Sister Berta Hummel and have no connection to this water carrier. The Hummel-Hummel figurine is a souvenir of Hamburg. It is probably worth less than $75.
Posted by Jillian's Bella Rosa Antiques at 7:11 PM