Yesterday we took a little side trip to an enchanting museum... the National Christmas Center.

Please bear with me as I try to recreate the scene without any of my own photos. I forgot to bring the camera! (I am using the museum's website shots.)

First, let me say how much fun and what a delight this tour was! The different exhibits which I will share with you below have so much detail and beauty.


This is the first exibit you see as you walk in past the ticket booth. 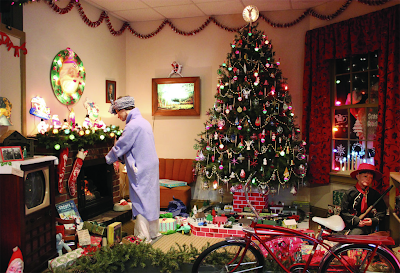 A vintage 1950's living room with all of the "trimmings" of the time period.

The bicycle, the TV, the framed "light" painting on the wall, the shiny brite ornaments, and all of the other Christmas décor, fresh out of an episode of "Happy Days." 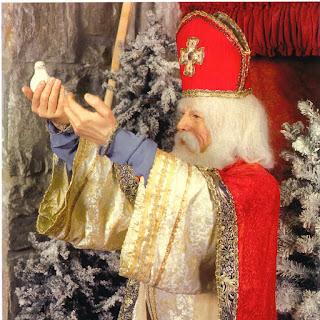 Then you enter a room of "Christmas Around the World."
This was one of my favorites. I enjoyed reading about the Swedish, German, Russian, English, Italian, and Turkish Santa Claus traditions. Did you know that Santa was Saint Nicholas from Myra, Turkey? He was a generous soul who wanted to give to the poor and needy children. 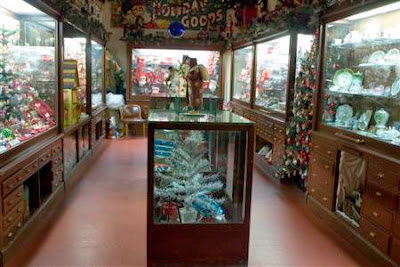 This room was also amazing and without my camera,
I cannot show you my favorite items in these
glass cases. There were "end of day" ornaments
which were made by putting what was left of the
colors into one last production which created a beautiful
mixed ornament.  There were Christmas china sets,
doll houses, hand blown glass toppers, you name it!
I could have stayed in there for hours, but Bebe was getting bored! 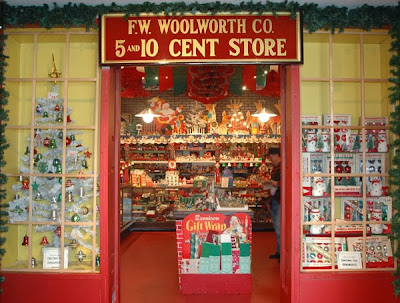 Next came this awesome, awesome ....really awesome
exhibit! I had seen it in one of my old Christmas Victoria Magazines.
(I save all of the Christmas issues of my favorite magazines and store them with the Christmas decorations...then browse through them for inspiration.) 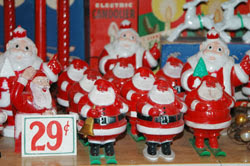 It is a "fake" WOOLWORTH store with ALL KINDS of Vintage

Christmas goodies of the day!!! Such fun!
Here are some more pictures: 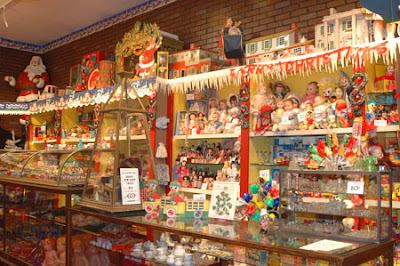 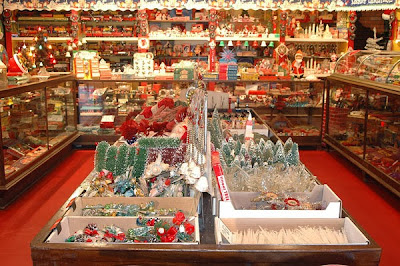 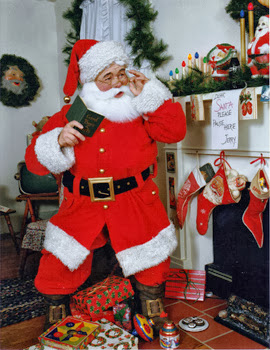 This was a 1950's "Night Before Christmas" display.
Inspired by a vintage Coca-Cola ad.
The kids are peeking in on Santa as he loads the
stockings with toys.
They don't leave milk for him, but instead, a COKE! 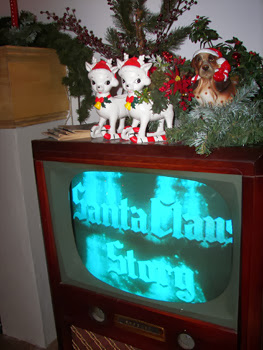 Loved the vintage video running in the old TV! 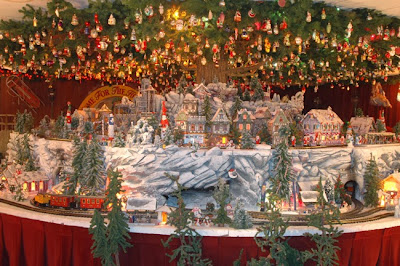 This was a very very large display of vintage trains.
It is so much bigger in person, with about four or five
layers of trains running through tunnels, etc.
The hubby would have loved it!
He was away on a ski trip. That means I'll have to go again! 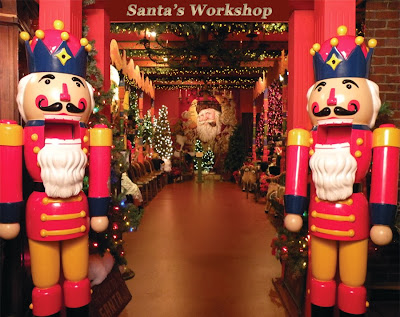 This was the entrance to Santa's Workshop.
The animated animals were amazing.
Reminded me of a neat display put on by a
restaurant we used to go to as kids, called
Zaberer's in Wildwood, NJ.
It closed long ago. Maybe the animals
were donated to this museum.
The image of Santa way at the back is made
up of many many many quilt tiles and placed
together in colors similar to a counted
cross stitch piece. It was really neat! 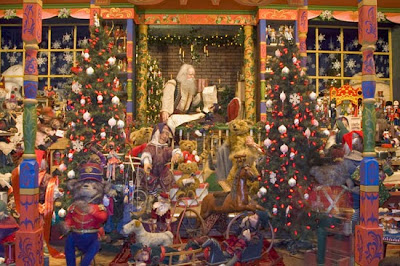 More details of elves making toys, dolls, nutcrackers,
letters from kid's to Santa, you name it, it was in here! 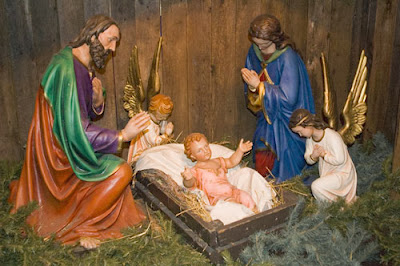 Then came the "Art of the Nativity "

This is a life sized nativity that had been in storage since the 1920's. One of the Marshall Field's flagship stores used it to decorate it's store for Christmas. It was given to the museum by Target Stores. Simply a wonder in all of the grandeur.
You really can't get the feel for it as this photo is a panoramic and it not three dimensional. I highly recommend it if you are in the Philadelphia/Central PA area. 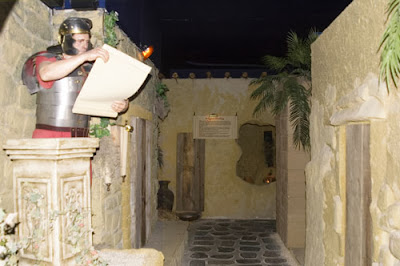 Following more displays of the nativity was a walk
through of homes and buildings that were similar to
what Mary and Joseph were surrounded by in their day.
Note the Roman Soldier on the left. 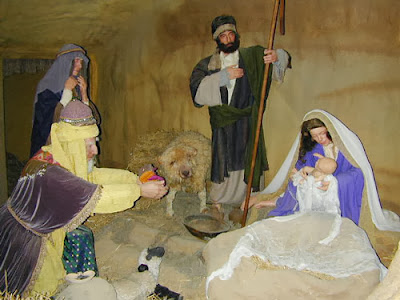 And appropriately so the tour ended with a beautiful
version of Mary holding the baby Jesus, wrapped
in swaddling clothes.
Beautiful, just beautiful! 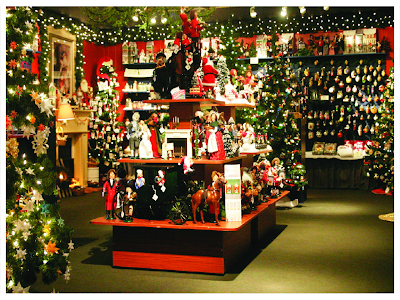 Then last, but not least, the gift shop!
We of course, HAD to bring something home to give as gifts next year and to remember our trip to the National Christmas Center!
Hope you enjoyed your visit as well!
Linking with Pink Saturday
at How Sweet the Sound.
(And thanks for the shout out, Beverly!
I had the "most clicks" again!)

thanks for a peek inside! I've often wondered...

I was there - you were right I love it!!! I've been several times and have taken different people each time and they were in love with it too.

One time we went they had an outside vendor show too, it was awesome!

I was there also and enjoyed every minute of my visit! Thanks for reminding me what a wonderful place it is. The header on my blog is photos I took on my visit. Warm hugs, Esther

How fun! I love everything about Christmas.