While looking for vintage sheet music
to place inside a vintage frame,
I came across a sheet torn from an antique hymnal.

The Battle Hymn of the Republic. 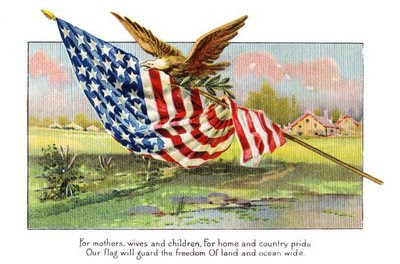 Mine eyes have seen the glory
of the coming of the lord,
He is trampling out the vintage
where the grapes of wrath are stored,
He hath loosed his fateful lightning
of His terrible swift sword,
His truth is marching on

I have seen Him in the watch fires
of a hundred circling camps,
They have builded Him an altar
in the evening dews and damps,
I can read his righteous sentence
in the dim and daring lamps,
His day is marching on

I have read a fiery Gospel
writ in burnished rows of steel,
"As ye deal with My contemners
so with you My grace shall deal,"
Let the Hero born of woman
crush the serpent with His heel,
Since God is marching on

Here are some interesting facts found on this website:
- Julia Ward Howe wrote the lyrics to “The Battle Hymn of the Republic" after visiting a Union Army Camp on the Potomac River near Washington D.C. in December of 1861. Her ancestors were famous during The American Revolutionary War.
- While visiting the army camp, she heard a favorite marching song of the Union Army. The song was set to the melody from the parody song “John Brown’s Body.” The John Brown in the song referred to a Scottish Sergeant in the 12th Massachusetts Regiment, not John Brown the famous abolitionist.

- The song's melody was made famous before the Civil War by a South Carolinian choirmaster and organist named William Steffe. He is believed to have written the melody in 1856. The song was originally titled “Say Brothers Will You Meet Us.”

- That same night Julia Ward Howe dreamed the first line and awoke with it on her mind in the middle of the night. She wrote the entire poem by candle light before dawn. She forced herself up from her sleep because she was fearful that if she did not immediately write the poem she would forget it.

- The chaplain of the 122nd Ohio Regiment taught it to Union soldiers every where.

- It is said that President Abraham Lincoln was so moved by the song, he wept when he heard it.

What immense feeling and passion in this song.

Posted by Jillian's Bella Rosa Antiques at 9:00 AM

hi jillian... hope you're enjoying a happy 4th with your family : )